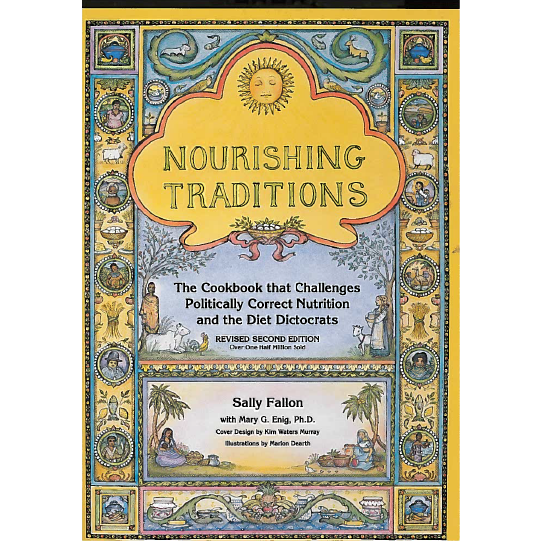 By Chris Masterjohn Sally Fallon’s Nourishing Traditions literally saved my health. For all I know, maybe my life. A Personal Encounter With Nourishing Traditions When I was in college I, unfortunately, performed an experiment in vegetarianism, with disastrous consequences. From my mental health to my teeth, these two years did nothing for me but deteriorate me in every way. For a more detailed account of this story, please click here. I worked on campus at the time, and my boss, Wayne Kirley, gave me a pamphlet on the benefits of raw milk. It led me to websites which ultimately introduced me to two books: Weston Price’s Nutrition and Physical Degeneration, and Sally Fallon’s Nourishing Traditions. I read Dr. Price’s book first, since it was available at the University library. It was the number one most fascinating book I had ever read. Dr. Price traveled to every «corner» of the earth to study isolated, non-modernized populations who were immune to tooth decay. Dr. Price found that an immunity to tooth decay was associated with dietary factors and not genetics (one of the prevailing wisdoms of his day was that tooth decay was due to «race-mixing»!), and that the same dietary factors conferred immunity to other degenerative diseases. His book is illustrated with countless, amazingly beautiful pictures of these vibrantly healthy people. This book woke me up out of my vegetarian slumber. The strong emphasis of Dr. Price’s findings was the importance of animal foods such as (raw, full-fat) milk or bones (such as in traditional soup broths), butter, cod liver oil, and cholesterol-rich organ meats. After reading the book, I was convinced I’d found the key to restoring my health. And I immediately ordered Nourishing Traditions which was supposed to be the «how-to» guide for applying Price’s principles to the kitchen, and making them rich and tasty to boot. It’s funny: even though hippies are associated with vegetarianism, this book’s antithesis, I expected Sally Fallon to look somewhat like a hippy, given the emphasis on pre-modern wisdom upon which the book was based. When I received the book, the picture of the author looked nothing like I expected. But more importantly, I was struck by the glow that Sally seemed to exude in the photo. I’d read many books on diet, but I’d never been struck by the degree to which the picture demonstrated the author’s vibrant health in this way. Having been exhilarated with my stumbling upon these two books, I immediately told my boss he should order it. He did, and soon reported back, «This is the best book I’ve ever read!» A cookbook! Now that we were both enamored with Nourishing Traditions, we decided to attend a local Sally Fallon lecture when it came around a couple months later. Photos can be deceiving. Makeup and lighting can do a lot of tricks for a photo. Did Sally maintain the same glow in person? Absolutely. My boss, Wayne, and I both concurred that Sally Fallon possessed something we could only describe as a «glow.» In fact, I hadn’t communicated to him my initial observations of the book photo up to this point, yet he nevertheless reacted after her lecture with the same words: «Doesn’t she seem to… glow?» If you’ve read my story, you know the dramatic consequences this book had for revolutionizing both my mental and physical health, for which I am forever grateful.

Nourishing Traditions: More Than a Cookbook

Nourishing Traditions is no ordinary cookbook. It has a 78-page introduction on nutrition, on which Sally Fallon collaborated with internationally renowned lipid scientist Mary Enig (PhD). The margins of every recipe page of this nearly 700-page book are filled with interesting food-related tid-bits of every sort: from modern scientific research, to ancient writings of spiritual leaders, to the history of food, to classic literature. This cookbook is truly a creative masterpiece, not simply a collection of recipes. For example, nearby the recipe for «Oxtail Barley Soup,» there’s a paragraph in the margin about for what uses the ancient Greeks valued barley. In the section on ground meats, you’ll find excerpts from books refuting cholesterol myths, and elsewhere you’ll encounter anecdotes such as the child whose genius IQ was ruined for a day when grandma came to visit with sugar-rich candy. Nourishing Traditions does not simply advocate a diet rich in animal products. It also highlights other important foods that our modern diets are missing. Pleasantly sour fermented vegetables have always been the mainstay of our digestive health, but have largely disappeared from the modern menu. Grains have traditionally been soaked overnight, which reduces mineral-binding phytates, enzyme-inhibitors, and helps pre-digest the grains, another practice we’ve lost. Nourishing Traditions provides the details on how to conveniently perform these tasks on your own. The fermented drink recipes (non-alcoholic) not only improve digestion, but are amazing pick-me-ups when working in the summer heat, and taste delicious. With the instructions Sally Fallon provides, they are also relatively easy to make.

How to Use Nourishing Traditions

Nourishing Traditions represents the full spectrum of foods that can be healthy. It’s important to realize that because a food is healthy, even super-healthy, it still may not be right for you. For example, Nourishing Traditions will enable you to consume the most health-promoting forms of grains, if grains are something you can tolerate. But whether you choose this food from the grand menu that Sally Fallon offers is something you need to determine by other means. A great detailed, but easy to understand, book to help you discover whether grains are something you should include in your diet or reconsider is Dangerous Grains. Gluten-grains like wheat and barley may be causing disastrous consequences to your health without your knowledge, and you owe it to yourself to determine whether or not this is true for you. People who cannot tolerate wheat gluten (the protein in wheat) and the protein in the other gluten-grains can experience autoimmune diseases of the thyroid and pancreas, massive intestinal damage, and cancer as a result of eating these grains. Often the symptoms are very soft or even silent until something disastrous like cancer strikes. While many people who cannot tolerate pasteurized milk report that they can tolerate raw milk, this is not the case for everyone. Although, many report that raw milk in other countries (non-US, such as India) gives them no problem, or that raw milk that is 100% grass-fed gives them no problem while 99% grass-fed does, and yet others claim that they can only tolerate raw milk if its «brix»– a measure of soil fertility– is high enough. Milk intolerances are probably largely a secondary problem, as a result of gluten intolerance or other factors that have damaged one’s intestines. Often milk intolerance disappears once someone eliminates gluten grains for good, or recovers the health of her or his intestinal flora. It’s entirely possible that you may tolerate raw milk well at some point, and then can enjoy the absolutely magnificent health benefits that it offers, yet that time might not be now if you are recovering from digestive issues. One’s tolerance for gluten grains and milk should be evaluated objectively. While it may be that certain traditional forms of sourdough fermentation would allow a gluten-intolerant person to eat these grains, as it has been demonstrated that some sourdough organisms do indeed break down gluten, this is probably only the case with traditional strains of these grains that are lower in gluten, and not the massively high-gluten grains on the market today. Since the jury is still out on this, it promises hope; but, given the danger that gluten grains can pose, if one tests positive for gluten intolerance, it is not worth the risk to try at this point. As pointed out in the introduction of Nourishing Traditions, one will also have to decide one’s own proportions of food. The non-modernized populations that Dr. Price found displaying vibrant health had a constant range of protein intake between 15% and 20%, and their fat ranged from 30% to 80%. (!) The balance was in carbohydrates. Your individual proportion of protein, carbohydrate, and fat, is going to have to be experimented with and changed according to what fits you best. Again, the grand menu of health-promoting foods that Nourishing Traditions offers must be picked and chosen from, and individualized to one’s own needs. Finally, it is important to take seriously Sally Fallon’s warning to limit the number of desserts consumed. Raw honey and maple syrup may be far healthier than refined cane sugar, and raw honey appears to be health promoting in moderate quantities, but one shouldn’t be fooled into thinking that since these are «healthy» desserts, they can be indulged in endlessly. Even good, healthy sugars, need to be eaten in moderation.

Nourishing Traditions Could Save Your Health Too!

If you’ve read my story, you know what a dramatic impact this book had on rescuing my health. I can’t recommend highly enough that this book be the primary tool of your kitchen. It’s highly educational as well as useful, it has a wonderfully fresh perspective, and you just might find that it initiates a revolution in your health from the inside out. And if you’re already healthy, you may be surprised at just how healthy you become. Sally Fallon reports that she continues to feel healthier each year she ages! Don’t take my word for Sally’s glow. If you have an opportunity to see her speak some time, please do so, and verify it for yourself. Something special was revealed at last year’s Weston A. Price Foundation’s Annual Conference that either bears some sort of cosmic significance or is simply a marvelous coincidence: In the very same hospital in which Weston Price died, uttering his final words, «You teach! You teach! You teach!» Sally Fallon was born the very next day!